Earlier in the month I joined the Scott crew to trial their new MTB creations. I have a deep love for my own Specialized Stumpjumper Evo and Hardtail Yeti Arc C, so often I'm reluctant to try anything new.


However, without sacrificing my love for them, I have found that love comes in many forms. You are allowed to love more than one bike…shock horror…it is not cheating! First to trial was the Genius 710 Plus Carbon. This remains to be my favourite Scott bike and my most likely buy for the rocky Lake District terrain. 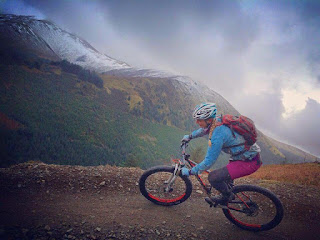 I looked at the Plus sized tyres and thought… ‘Oh no, it will be big and clumpy, with little control’. Others may have similar prejudiced opinions. But you should never judge a bike by its colour. Just like the Orange bikes that may appear bulky, but ride like there is nothing to them. The plus tyres were in fact amazing, with 27.5 inch wheels, but feeling like a 29er with the extra tyre width. I liked this as I'm used to riding a 29er and they felt comfortable. Every time I thought I was going to slip they would find traction where a slimmer tyre would not. The bike inspired confidence, as it rolled effortlessly through all the terrain that Whinlatter could throw at it. The Genius 710 Plus had the perfect ‘trail’ feel to it, with 140mm front travel and 130mm rear. The forks lock out well, making climbing much more efficient. It's not an XC race bike, but it was light at 13.20kg - making quick work of the climbs. If you want an even lighter version, go for a Genius 700 Tuned Plus, with its lighter build kit it weighs in at 12.30kg. Either bike would be the perfect trail companion. The 740mm T shape flat handlebars let me sit comfortably within the bike, not feeling pushed over the front. I am 5’11 and rode a size medium that was a good fit. 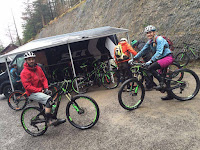 The second bike I rode was more of a Cross Country bike. The hardtail alloy Scale 710 Plus, with 120mm Fox forks. This bike felt lighter; which is funny because it is! It only weighs approx. 11.80kg, despite the alloy frame. Again, the plus tyres made riding more relaxing, rolling obstacles, but still feeling responsive. Initially I had a medium and it was too small at 5’11, the large was a better fit and I felt more in control. Emphasising the fact that the right bike size and fit makes a massive difference. I kept getting confused between the gear shifter and the mandatory new bike bell, but it did make people move out my way! You can get the complete bike (including the excellent bell) for just under £2,000, making it perfect for training or intermediate racing.


Saving the most entertaining bike for last, the E-Genius 710 Plus. After several laps of the trails on other bikes, I was worn out. I didn’t want to miss out on the last ride with the fast Scott guys. So I chose an electric bike to help me around. I was laughing most of the way saying “whoopee” whilst they were having to concentrate on breathing. The best thing was being able to choose when I wanted to work. Having five power settings, from ‘Off’ being no assistance to ‘Turbo’ being very powerful. They’ve even got walking covered with a 'Walking Assist' button for those hard pushes up hill.  It felt similar to the Genius bike downhill with 140mm front travel and 130mm rear, although it's much heavier (21.80kg). This is no problem because of the help you receive from the electric power. Downhill the extra weight helped me to carry my speed.

Although it felt cheeky, it meant I could do another lap and enjoy the descents again. I would recommend these bikes for people that are fed up of being at the back, or recovering from injury. It just gives an extra hand meaning you can enjoy the ride, rather than worrying about keeping up with everyone else. You can have a good workout depending on what setting is used, so you can still improve your fitness and abilities at your own pace. I love that these bikes make the sport more accessible to a wider range of people.

Recently I spotted a similar bike, the E-Contessa Genius 720 Plus in a beautiful purple and blue, for any ladies out there that have the same favourite colours as me. But remember don’t judge a bike by its colour…although it is really really pretty and I want one.

Thank you to the Scott Crew for an excellent demo day and setting us up on some sweet bikes. 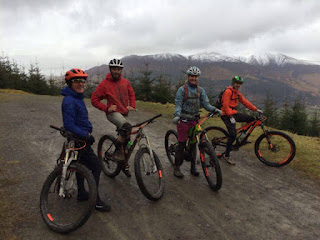