Escott Park Cyclocross and The Mavericks away weekend 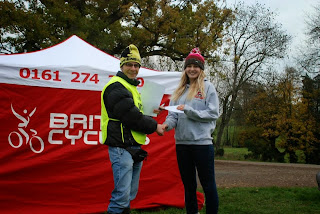 Today was another round of the South West Cyclocross at Escot Park. Luckily the weather held, and cool sun and fresh frost motivated us to move even faster to warm up on the hilly cx course.

This was the first time I'd ridden on a cyclocross bike off-road, other than for a 20 minute cycle around the park last night in the dark. So I had no idea what to expect on my new bike (I usually ride a Specialized hard tail Fate mountain bike). But it's safe to say that narrow tyres flow better on a gravel sprint start and a section of road in the circuit.  I do however need to understand why they bother to have drop handle bars and no suspension as my back was killing me...any advice? However, it did make the downhill's a lot more exciting and different, which is all part of the fun.

I got used to it quicker than expected though as I managed to take a second place in the senior women race, after fighting off Maddie Horton for as long as possible (well for a couple of laps at least - she is just too quick haha!) and Angie Pike following very closely behind me.

I was also really happy to see a lot of new women faces giving it a go and all completed it with determination and skill. Great girl power, helping to boost the entry list to 84!

With a lot of competition at todays race, it was tough for everyone, but I'm so impressed with overall winner Steve Davies who was so fast I barely noticed him come past when he lapped me - well done man!

The results were done very smoothly and quickly for the event! Great work from the organisers, thank you!

If you want to see more photos from the event go to the South West Cyclocross Facebook page and Carl Austen has kindly posted some.

A couple of weekends ago, the South West Youth Squad and I went to Mine Head for the weekend to stay at Base lodge and endure a weekend of fun and hard training lead by Maddie and Jay.

We arrived on the Friday looking forward to getting started on our training, but first we had to have some inspiration and so spent the night watching "Danny Macaskill" and "The fastest ever bike crash", just to stimulate our adrenaline.

On Saturday we set off for a plyometrics run, including piggy back races to add extra aching to our legs. In which Harry showed his strength...as I have never ever been lifted by a 12 year old before! After the rousing start we came back to the lodge for a second breakfast and collapsed on the floor of the bedroom for an hour, before setting off to do some riding.

The afternoon was spent on a ride and a session of hill sprints, and uphill time trials. Being so great with directions I managed to go on a bit of a detour, going on a separate hill, because I'm special, but my instincts guided me in a circle back home just in time for the second time trial...Yay.

On the Sunday, we woke up with aching muscles, but all keen to get going, knowing that we had a surprise activity planned.  I thought it was trampolining (have no idea why) but luckily it was orienteering as I can't bounce very well.  Going in a team with Harry and Patsy, we used our awesome navigation skills (everyone knows my navigation is great from the earlier hill session) to run in last to the house, but still getting a share of the prize of 'pan aux chocolat', very yummy thanks Maddie and Jay.

Later in the weekend, local trail ferret's Joe Barker and Ed Welsh showed us some of Minehead's best routes.  I can see now how they are so strong on the uphill's when racing, they are all massive there. But the uphill's don't come without immense downs - it is amazing. The ride was unbelievably awesome, with Ed and Joe being superb guides and continuously checking that we had survived the descents.

Arriving back, I strived to stay awake until we headed home in the Fully Sussed van, when I dropped straight to sleep and apparently snored... but I definitely don't snore...I hope! It was safe to say that I have not been that exhausted in a long time! Woooo...it shows it was a good training weekend. All aims achieved!

THANK YOU SO MUCH JAY AND MADDIE, you obviously put a lot of effort into it and it really payed off because we all loved it, so thank you so much! You guys are the best coaches in the world!!!!

If you want to have a coaching session with them...which I would 100% recommend if your keen on mountain biking, go to the Fully Sussed website. You could not meet better coaches anywhere else in the world.
Posted by Unknown at 15:18