Two weekends ago was the last Nationals of the 2013 season, at the 2012 Olympic course, Hadleigh Farm.

It was one of the most challenging courses for me as I found the rocks and gravelly terrain quite intimidating. But I count myself lucky that I'm still in one piece. Poor Charles Hough fell off the triple trouble A-line and had a nasty trip to the ambulance with stitches on his hip and a big knock to his head. Darren Caines broke his collar bone at a similar time as well! Waiting around the ambulance was not a nice place to be as there was a continuous trail of injured people coming in. So me and the team went off to ride the course taking careful steps to complete the challenge of the technical descents like the rock garden.

However, in the race everything ran smoothly and I was so happy with my first ever National podium, coming in third place, behind Isla Short and Imogen Buick. I was also, so proud of Patsy Caines who is part of the South West MTB Squad with me and who won the Juvenile category by a mile for the first time.

I was so happy to finally get on the podium and it has given me massive excitement for next years season! Bring it on! 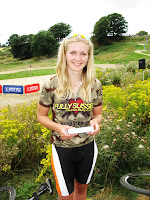 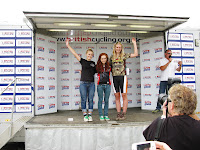 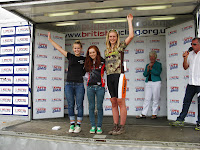