Another early start at 5.45 to travel up to Margam Park in Wales for round 1 of the Welsh series.  Getting told right from the start from Gary Andrews and Ben Farrer from Certini that me and Harry Birchill were going to be treated like a professional all day - well we had to hold them on that one!  Right from the start I got to have a luxury sleep in the Certini van on the way up while they loaded my bike and kit and drove all the way.  We even got a coached pre-riding/warm-up session, plus a portable bike wash (Ben is great with a bucket and sponge!) and non-stop entertainment/cheesy jokes.  Thanks guys!

I was really nervous going to this race as this was one of my bigger races because all the women were together, which included an ellite, masters, sport and veteran woman, so I decided I just wanted to take it as an experience.

It started well though, getting a perfect starting position being at the very front!  Plus, a random lovely lady came and held an umbrella over me in the rain whilst waiting to start!  Thanks to her I think I was saved from pneumonia ha-ha.  It's funny how you start off so cold and within about 30 seconds your sweating like a pig!

When the race started I couldn't quite believe that I lead the first 10 seconds - until Elite rider Mellanie Alexander came flying past me, she was super speedy and someone I would love to aim to be like.  I attempted to stay on her tail for a while which worked well, but by the end she gained 8 minutes on me.  Which still left me in second place, and being my first year in Juniors I was pretty happy with that! 2 is my lucky number as well!

The course was very slidey, muddy and involved a fair amount of running.  I think I forgot to breath down some of the descents, especially after my fourth fall, one being a close collision!  But that just keeps it exciting doesn't it!  Overall it was a fab course with a mixture of fast fire-road, to granny-ring hills and smooth or rooty or muddy descents.

I think Patsy Caines stood out for me, as she took this course well with her technical skills and also came second!  Along with Gary and Ben from Certini!  Also, Evie Lane was very impressive getting out there and not giving into pressure being one of her first bigger races; she held her ground well making the South West Youth Squad proud!  Harry Birchill got a superb time, It's so easy to forget he's only 12 - very impressive!

I'd like to say a massive thank you to Jay and Maddie from Fully Sussed for organising the course and great commentating!  Also to any other organisers, marshalls or volunteers who made it happen and to USN sports nutrition for sponsoring the prizes for us.  Thanks again Gary and Ben from Certini as without them I wouldn't have had a race!
Posted by Unknown at 14:04 2 comments:


Travelling up to Portreath last weekend was one of my many adventures with the South West MTB Squad.  For the journey up, Gary was stuck with me and Evie, which meant he had the fun of loading up our luggage.  Two girls going away for a weekend... "You never know what you might need"...
﻿﻿﻿﻿

And this is why we needed a Certini van!

When we got to the bunk-house that we called our home for the next two days, I was rather supprised at how nice it was.  Having paid only a small fee, the bunk-house had a whole games room and nine beds for us four girls to choose from in our dorm.

﻿﻿﻿﻿﻿﻿﻿﻿﻿﻿Having settled in and saying hello to our long lost brothers and sisters (the rest of the squad), we had a quick thrashing of ping-pong before a girly game of scare-in-the-dark. Which for me was very un-fair as my laugh would always give away my hiding place. Plus, Patsy, being cute and tiny, could literally hide anywhere...


We then decided it was time for our pre-ride stretching - preparing us for Saturday. 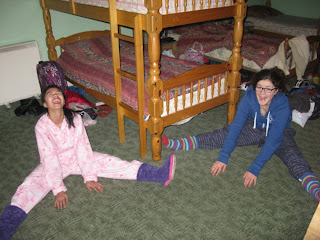 
After starting the morning with a massive bowl of cheerios at 6.45am, we all headed to "The Track" where we spent the day playing on the BMX course and learning new skills and tricks that will hopefully pay off in our XC racing. 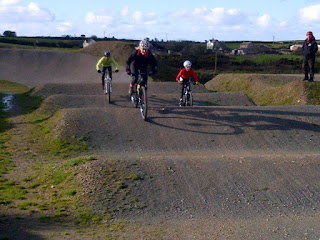 In the morning we were split into a girls group and boys.  Whilst the guys went off to experiment their tr﻿﻿﻿﻿﻿﻿﻿﻿﻿﻿﻿﻿icks on the big jumps, we started with some top-notch coaching from Steve Tompkin the maker of the Track. He taught us how to pump, manual and hop like a pro.  Then we had many fun races and some timed runs, where Gary lead for the women and then Maddie being the runner up, with Ruby following in third place only a second behind and after a little crash and a re-do I came in fourth, only a second behind Ruby, and Patsy and Evie then following closely behind.

It was definately some of the most fun riding I have ever done and made a really nice and exciting day out! Even if your not riding the whole time, you can watch tricks and flips being done by some of the locals, which is pretty awesome and not forgetting the foam pit, where you can try some Tom Daley tricks! 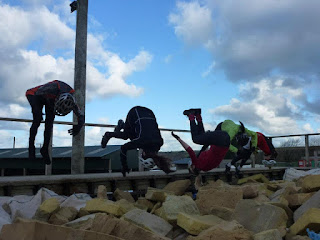 After about our fitfth hour of playing at the course, we had to be dragged away.  Arriving home for a massive snack/feast to re-energise - which we later realised was not a great idea when we then found out we had a circuit session still to come!

The Hortons and Gary were keen on making sure we made the most of our weekend, making sure we came away un-able to walk down the stairs! An hour later, after numerous tricep-dips, shuttle runs, burpees, lunges and squats etc.  We waddled back knowing we could finally rest.  Having won rock-paper-scissors for the shower I was then also pulled out of the hat for cooking. Having Fin as Chief cook, plus Jack and Harry on the team, we managed to conjure up pan-fulls of pasta... With a few over-flowing pans in the process. Then digging into some yummy and creative deserts... Including Ruby's apple cake; looking extremely cool! 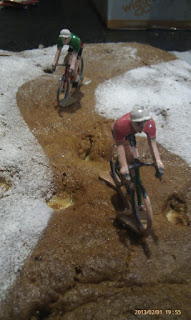 Bed that night was generally blissful... all of us girls said "Lets just gossip in bed tonight instead of leaping about all night!", but when the lights went out - silence. We were all imediately asleep! Well done, Maddie, Jay and Gary you finally got us to be quiet! ha-ha.


Sleeping through our 6.45am alarm, until 7.15... all four of us reluctantly got out of the cosey beds. But once we were finally up we were raring to go. Having questionares to fill-in at breakfast we were studious children once again. With Patsy especially "listening and ready to learn". 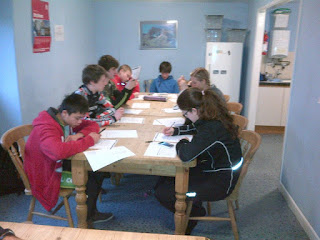 Followed by rollers-practise. Setting the rollers up in-between a thin corridor so we could only fall as far as the wall. My first time ever on this unusual invention, I was being held on by Jay and managed about one minute of pedalling on my own. Which I was quite happy with, until I saw the pro's do it - with Fin and Harry both doing no-handers whilst riding! I think I need a few more practisises before I can ride straight. Once everyone had tried and succeeded more than 3 seconds on their own. We were ready to face the chilled outside for some real cross country riding. 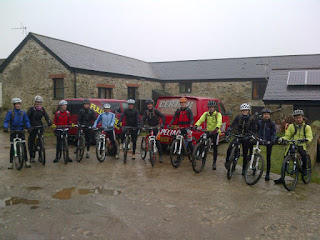 Cycling 12 miles to Wheal Maid Valley there and back was definately worth it. Having a race coming up there later on in the year, it was great to ride around the mine-field like place and test out what it's like. It's tracks are really nice and smooth flowing and have plenty of nice technical drops that make you hold your breath on. I was very impressed with the other girls performance as they seemed fearless! Plus, the guys seemed to find extra crazy things to do that I couldn't even watch without squealing. Especially Charles as he is just back on his bike again and still cycled everything. Very exciting stuff!

We then did a 15 minute race simulation on a 3 minute laps, where Finley seemed to fly by and lapped me! D'oh! I was rather shocked but it shows his training is definatelty bringing the best out of him. I was still happy with my performance though as I still felt I was putting my all into it, and got around a fair few times within the time limit! I cannot express how excited I am to race there! Which you can find out about if you click "here".

After this busy and tiring weekend, I slept all the way home and as soon as I got home at 6pm I fell asleep. It definately took a lot out of me, but it was a weekend I loved every minute of and hopefully it will all pay off in my next race:

The Welsh XC at Margham this weekend; hopefully see some of you there!

Many, many, many, many, many thanks to Jay and Maddie from Fully Sussed Mountain Biking Academy and Gary from Certini for coaching and oranising the weekend. It is definately one to remember. Thank you.

For more on our weekend, go to XC racer.
Posted by Unknown at 05:51 No comments: